About The Back Porch Mail Center

In November of 1949, working from his family's two-car garage, Emilio N. "Chico" Jacaman, founded a mail order retail company called Jacaman Gift Co., Inc. In the early 1950's he began drop-shipping directly to retailers and began his wholesale business. Looking for a local outlet for those items no longer carried in his catalog, Chico opened The Back Porch Country Store in the late 1970's. The Country Store was built adjacent to the back portion of the warehouse of the wholesale business, thus the name The Back Porch. The Back Porch's charm comes from its original construction from recovered bricks, grates, windows, window and door frames and flooring from old buildings that were being torn down in downtown Laredo.

A few years after its inception, Chico opened a back portion of the wholesale warehouse attached to The Back Porch in so doing, enlarging its space. And The Back Porch Country store began selling unfinished furniture. 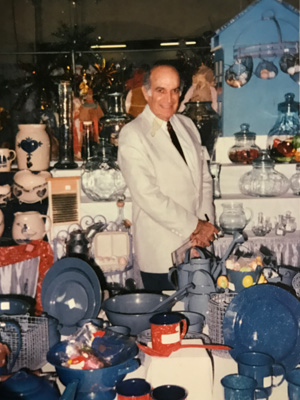 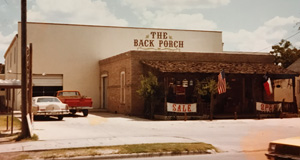 At a weekly poker game with friends, a local realtor told Chico about an article she read in an entrepreneurial magazine about an up and coming new industry of the mail and parcel business. She suggested Chico check it out; and he did. In 1989, ten years after opening, the first bank of 300 mailboxes were added, and The Back Porch became one of the first mail and parcel centers to begin receiving mail and packages for its customers in Laredo, Texas. The Back Porch also provided outbound shipping services by USPS, FedEx and UPS, and later added Estafeta, LSO and DHL and business services such as money order sale, copies, faxes, bank deposits and more.

About the time that Chico was putting the finishing touches on the mailboxes, his daughter Sandra "Sandy" Jacaman, was graduating with a Marketing degree from the University of North Texas. In a conversation Sandy was having with her father about job prospects, he offered her a position running his new venture at The Back Porch; and without hesitation she agreed.

Carmen Hernandez came to work for The Back Porch when the mailbox business was blossoming. Sylvia Guzman, who has since retired, was already employed in the retail outlet of The Back Porch Country Store. The early years at The Back Porch were focused on the retail with a gradually increasing flow of mailbox customers from the "dos" Laredos and northern Mexico. The girls can remember when they started receiving twenty packages a day. Then that number increased to 70 then to more than 250. Those were big numbers in the early days. The trio did it all.

The tides began to shift, and the mailbox business began to take off. The retail section of the warehouse was divided in half to accommodate the growing need for an official package warehouse. Because the mailbox demand continued to increase, in the 1990's Chico added two more banks of mailboxes more than doubling the original numbers.

A lot of change occurred during the 2000's. Because of Carmen's initiative and innovation, The Back Porch launched shipping services to Mexico thus expanding our client base from our border all the way to Monterrey, Saltillo, Mexico City, Aguascalientes, San Luis Potosi and throughout all the Republic. In 2007, The Back Porch officially became incorporated as The Back Porch Mail Center, LLC. By the end of the decade, an additional three more banks of mailboxes were added and The Back Porch Mail Center began occupying an adjacent retail space for warehouse use.

From 2013 to 2015 The Back Porch Mail Center added the equivalent to 4 more banks of virtual mailboxes and the customer service counter was moved to a larger area of the center. The warehouse space was increased once again.

In 2016, The Back Porch Mail Center went through a major renovation. Two more banks of mailboxes were added reaching close to 2,500 mailboxes and over 5,000 customers. The Back Porch Mail Center now boasts to have over 15,000 square feet of warehouse space, a safe for storing valuables, a refrigerator for perishables, a forklift and pallet warehouse for larger items, gated area for the occasional receipt of a vehicle or boat and almost 4,000 square feet of space for customer convenience.

We also provide receiving service to two international industry customers. We now have ample customer service space for customer package pick up, over one dozen unpacking tables so that international customers can conveniently open and consolidate their packages, a private dressing room so that customers can try on their purchases and immediately take care of the return if they are not satisfied with the fit, and an area specifically dedicated to business services and outbound shipments.

In that same year, The Back Porch Mail Center was named the third largest private mailbox business in the nation at a national convention in Las Vegas, NV and is accredited by several national organizations including BBB.

2017 is shaping up to be a truly exciting year! Change for the better is coming soon!

In April, The Back Porch inaugurated its first international location, Mail Center at The Back Porch, in San Pedro Garza Garcia, Nuevo Leon, Mexico. Mail Center will continue offering the same services as its parent company. The Back Porch Mail Center is also upgrading its technology and will be unrolling a truly interactive system for its customers.

Upon completion of his degrees at Texas A&M University, long-time employee Ricardo E. Rodarte, has joined The Back Porch family as a permanent addition to our administrative staff.

The Back Porch Mail Center is extremely grateful for these last 28 years and for our dedicated customers and will continue to improve and innovate its services to fulfill every business service need. We recognize that we would not be the same without the support and loyalty of our customers.

We are here ready to serve! The Back Porch Mail Center hopes to continue to be "Your One Stop for All Your Service Needs!"